Skip to content Skip to sidebar Skip to footer

What is Color Guard?

Stemming from the old military color guards and marching bands, this combination of sport and art has evolved into a visual/musical performance activity. Using all styles of dance, flags, rifles, and sabres, the members will perform at football games and compete at the highest level of international competition.

CGCGtoo is our J.V. Color Guard and is just the beginning of a much larger artistic and competitive fine arts program in the Center Grove School District.  It’s comprised of middle school students from both Middle School Central and Middle School North. This is a positive and encouraging environment that focuses on introducing the foundation of color guard thru dance, flag, and performance techniques.

Center Grove Color Guard is a performance group that accompanies the marching band during the competitive band season by being the “visual music”. We spin flags, rifles, sabers, and dance to interpret the music and drill formations on the football field during the competitions and half time at football games.  The Marching Band Color Guard is made up of mostly high school students.

The second half of the school year we participate in an activity called “Winter Guard” which takes all the skills we began to learn over the fall and takes it to the next level. Winter Guard is for the color guard only and doesn’t involve the band, which makes it twice as fun for the members to shine in their own spotlight. The winter guard season is the pinnacle of our year giving the team the opportunity to compete on an international level. We perform indoors to taped music, which is another bonus of the winter guard season! —No wind 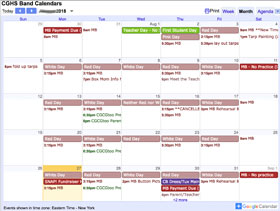